Sitting on the floor on level four of the Austin Convention Center, I am waiting for the exhibits to open and wanted to reflect on what I have learned today. It has been a pretty good day though it has had some infuriating moments.

My first panel was You have your degree, now what? Planning a rewarding career. The Brainy Librarian presided over the session that was led in part by former ALA President Maureen Sullivan. Members of the panel were Carol Diedrichs, Director of University Libraries at Ohio State, Miguel Figueroa of ALA’s Center for the Future of Libraries, Sara Lestrange who is Manager of Communications in the Office of the Dean of Students at UT,  and digital lawyer librarian Gretchen McCord. The panel was diverse in their backgrounds and provided some great information on career planning and job seeking. The best points I took away from it were:

After lunch was when it started to take a turn. Only Carol and Sara joined us for the last half. I was very disappointed in the way Maureen Sullivan treated Sara. She cut her short many times saying she wanted to hear from Carol because these people (meaning those attending the session) were “behind where Sara was in her suggestions”. She was suggesting that the tips Sara was giving such as not using Word for creating our resumes, putting their Hogwarts house on their resume, and getting rid of resume objectives was ahead of the library field. Sara talked about wage theft, the phenomenon where people (most of the time, women) work far more than they are paid for because they volunteer for things. Maureen brought it up later in the program suggesting that it was not a phenomenon in professional fields. And when attendees were asking questions that seemed to be of interest to the group, she kept wanting to force the discussion in another direction.

I was pretty angry as were others sitting at my table. I tweeted to Sara that we were most certainly NOT behind where Sara was in her suggestions. I was embarrassed that a libraryland outsider was treated as such at our conference.

It is that kind of thinking that makes me infuriated with librarians. No wonder we are so misunderstood as a profession! Grrr… anyway, back to the day.

The next panel was a dry-as-bones how-to on using Google Analytics. There wasn’t anything I couldn’t learn from a tutorial most likely, though the presenter did talk a little about how Texas Tech (his institution) uses the information gathered by Google Analytics. It was informative though. We use the tool at work and I wanted to know more about it.

The next session was You Are Not An Imposter: Finding Confidence as a Library Professional. Though I disagreed with the way they spelled impostor, I was really looking forward to this one as I have been experiencing a lot of this lately. It was also informative, though didn’t have much information specifically about librarianship. It more defined impostor syndrome, gave a list of the most common traits, and gave tips on how best to deal with those issues. The more I know about this phenomenon, the more comfortable I feel at my current place in my career.

That let out earlier than expected so I ducked into another session and started participating in a Battle of the Bluebonnet Books game. I was rather proud to hold 3rd place even if for a very short time! 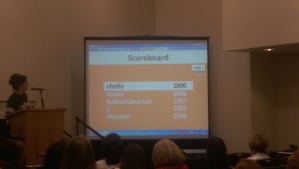 My last session of the day was Truth Be Told: Front Line Stories on Dealing with the Public. I turned down two other sessions of interest to go to this because it was pitched as customer service. I am working on a customer service workshop for a library in a month and I wanted to have relevant and timely information to discuss. The presenter read two stories that had been submitted and then attendees talked about them. Though I heard some very interesting and humorous stories about vomit in the book drop, turning tricks in the public library, and trafficking drugs using library books, it was not what I had envisioned and I was very disappointed.  Me? I read poetry about librarians instead. The other panels I wanted to go to were on the other side of the convention center. I never would have made it in time to make a difference.

This brings us to now. I am waiting for the exhibits and the #kidlit meet up at Champions to start in about an hour. I don’t want to leave the impression that I haven’t loved the first day of TLA. Reflecting has made me realize that I was bugged about a couple of things more than I realized, though. Perhaps I will see if there is a channel for discussing these kinds of problems through TLA.

For now, I am going to listen to Brené Brown’s TED Talk on The Power of Vulnerability as suggested by Nickolas Means, the presenter of the impostor syndrome session.
[youtube https://www.youtube.com/watch?v=iCvmsMzlF7o]

I am a Professional Reader

I am a Picture Book Ambassador

This error message is only visible to WordPress admins